After our short trip in Hungary it was time to hit the road again and put some major kilometers on the car. Leaving Hungary we stopped at the first rest stop to pick up our Austrian Vignette (check the Prague blog for hints about driving in Central Europe!) and were immediately hit by the reality that we were back in the expensive part of Europe again! (Where did the cheap fuel go!?)
Vienna was a city that people had mixed opinions on. Some told us a week is needed to see the museums, architecture and the sights, while others said a day will be more than enough. Since time was of the essence for us, we opted for only 1 day. Good thing Budapest to Vienna was only 2.5 hours! We quickly realized there was no way 1 day was enough.

We had a bad experience with our hotel here, something about a broken A/C, the rudest hotel GM ever and sleeping on a sofa bed, but this is where we suggest using Ebates to book through Hotels.com, we called the Gold Team and they tried their best to make the hotel help us, but when they didn’t, they issued us a voucher for the stay! Still after 6 months of travel we are so happy with Hotels.com and they customer service.

We did however, revel in the fact that we were in the home of Red Bull, and it definitely didn’t disappoint! There were so many fun and different flavors. Did we try them all? OF COURSE WE DID!

Vienna or Wien in Germany had a few famous things we wanted to see and do. Wiener schnitzel was tops for Dean, the Spanish Riding school was tops for me. The city is small by most modern European standards so it was extremely walkable. If you didn’t feel like walking there was a tram system. While it was nowhere near as comprehensive as Prague or Budapest, it works in a pinch or a scorchingly hot summer day like we had. We decided to walk our way into the city and take the tram back, the perfect compromise! Plus, we got to see some gorgeous architecture along the way.

We walked to the city center to Stephansplatz, with the highlight being the 900 year old St. Stephans Cathedral. This area is tourist central! There were souvenir shops one after the other, high-end brand names and over priced cafes. We bought our expensive Austria magnet and high tailed it out of there! Slowly meandering through the streets we made our way to the Spanish riding school in Michaelerplatz. Being true to form, we didn’t plan out our trip to the riding school and missed the final show of the day because it was sold out. Nooo! Who would’ve thought the world famous Lipizzaner Horses show would’ve been sold out during the height of summer? Silly us. All sarcasm aside, this was a bummer for me, we could sit in their cafe and enjoy a Wiener and coffee and look at the stables but that didn’t sound like fun. So, we kept on going!

In the distance we saw the spires of the Rathaus, the city hall of Vienna. A beautiful Neo-Gothic style building certainly piqued Deans interest so we headed towards it. When we got there the square in front was filled with a food stall park and cocktail garden, so fancy! There were so many amazing choices! Australian, Thai, Mexican, BBQ and more, but since we had just snacked about an hour earlier we decided to wait until dinner time, bummer because we could’ve recreated our whole world tour food wise in a matter of minutes there. The beautiful ornate town hall was also blocked by a giant movie screen, total bummer for us, but amazing for people wanting to watch a movie and eat great foods on a summer evening.

Our next spot to see? The Votivkirche or Votive church, another beautiful Neo-Gothic church, this one built in honor of Emperor Frank Joseph surviving an assassination attempt. Sadly for us, our attempt at seeing some of Vienna’s beautiful architecture unadulterated was dead on arrival to the church. This too was being refurbished so we couldn’t get a full view. Sad, we took a seat in Sigmoid Freud park to ponder what to do next. We stopped for a snack and took the tram back to our hotel to try and figure out dinner.

Leaving Vienna there were some things on our list we wanted to see. 1. The hills that apparently are alive with the sound of music 2.Red Bull headquarters 3. Alpine lakes 4. Salzburg. So we made an early start and headed for the hills! First up, hills…. it blue skies and puffy white clouds? All here! We didn’t really have an area to stop per se, but Dean loves his Red Bull and the tiny village that houses the world HQ is beautiful and surrounded by Great Lakes, lakeside villages and soaring mountains. It was a truly awe inspiring sight. I think we spent at least a few hours driving around in amazement at what nature has provided for this part of the world, truly perfect!

The Red Bull HQ was not what you would think when you think of a huge energy drink that sponsors extreme sports, F1 racing, eclectic music and more. It was actually a very serene place, and if you didn’t know exactly what you were looking at, you’d never know what it was. The main building looked like a volcano set peacefully in the woods, surrounded by flowers and walking paths. No big signs, no red, blue and silver markings, nothing to make you think that you’ve found the holy grail of Red Bull-ness. The slightest hints, a herd of charging bronze bulls blasting through a water feature, oh and the people in offices with cases of Red Bull stacked up on their desks. Fan or not, you’ll love this area with its deep mountain lakes with a sultry blue hue, soaring dark green mountains with vibrant green fields and bright purple flowers.

About 30 minutes away you will find the Red Bull Hanger 7, a beautiful site on the grounds of the airport that houses some of the fun extreme sports items that Red Bull has come up with over the years. From stunt planes and helicopters to F1 race cars and Felix Baumgartner’s Jetpack! They even have a fun 3-D photo booth, which would be even more fun if we maybe were just a bit thinner. Seeing ourselves in 3-D wasn’t exactly the highlight of our day!

Driving into Salzburg you can tell it is one of those picturesque old European towns. Beautiful architecture, cobbled streets, hidden alleyways with little restaurants and bars, and of course Luxury high end brand stores, just in case you needed an emergency Louis Vuitton! The town has a beautiful bridge that has been lovingly shackled with locks of love from all over the world.

During our trudge through the city and missing out on lunch we needed a few recharges throughout the afternoon. The first place seems almost like blasphemy in a city like Vienna, but it was so good. While walking we found a shady spot near some tram stops that had a line of food stands, some selling pizza, sushi or kebaps, but the one that we needed to have was the Asian chicken noodles! Lomein noodles cooked on a flattop grill and loaded with fresh crunchy vegetables like carrots, cabbage and red peppers. The crowning achievement, however, was the huge crispy fried beer battered chicken breast the size of my head that was chopped into strips and laid on top. We slathered some sweet chili garlic sauce and hot sauce (not classic Austrian fare) and dug in. It was amazing! Maybe moreso because we had eaten the heavier Central European foods the past few days, because we hadn’t eaten that day or because it was simply an amazingly delicious bite of food that was cheap eats!

Cafe Votiv: Right next to the Votiv church was this aptly named cafe. We glanced at the menu and decided on the famous Sacher Torte for Dean and an iced coffee for me! Sacher Torte is a rich chocolate cake with apricot jam enrobed in silky chocolate ganache with a huge dollop of unsweetened whipped cream. The sweet cake and fruity jam play so well with chocolate. Dean was happy to check this off his “eating it in its homeland” bucket list! My iced coffee arrived and since it was so hot out I was looking forward to a big icy cold coffee over ice! Out comes a milkshake type glass with milky hot coffee topped with a scoop of vanilla ice cream and whipped cream… What? Not that I was complaining because hey, does that sounds good or what? It just took me by surprise! Lucky for me it was so warm out that with in minutes it melted into a somewhat drinkable iced coffee to chill me down some. Delish! 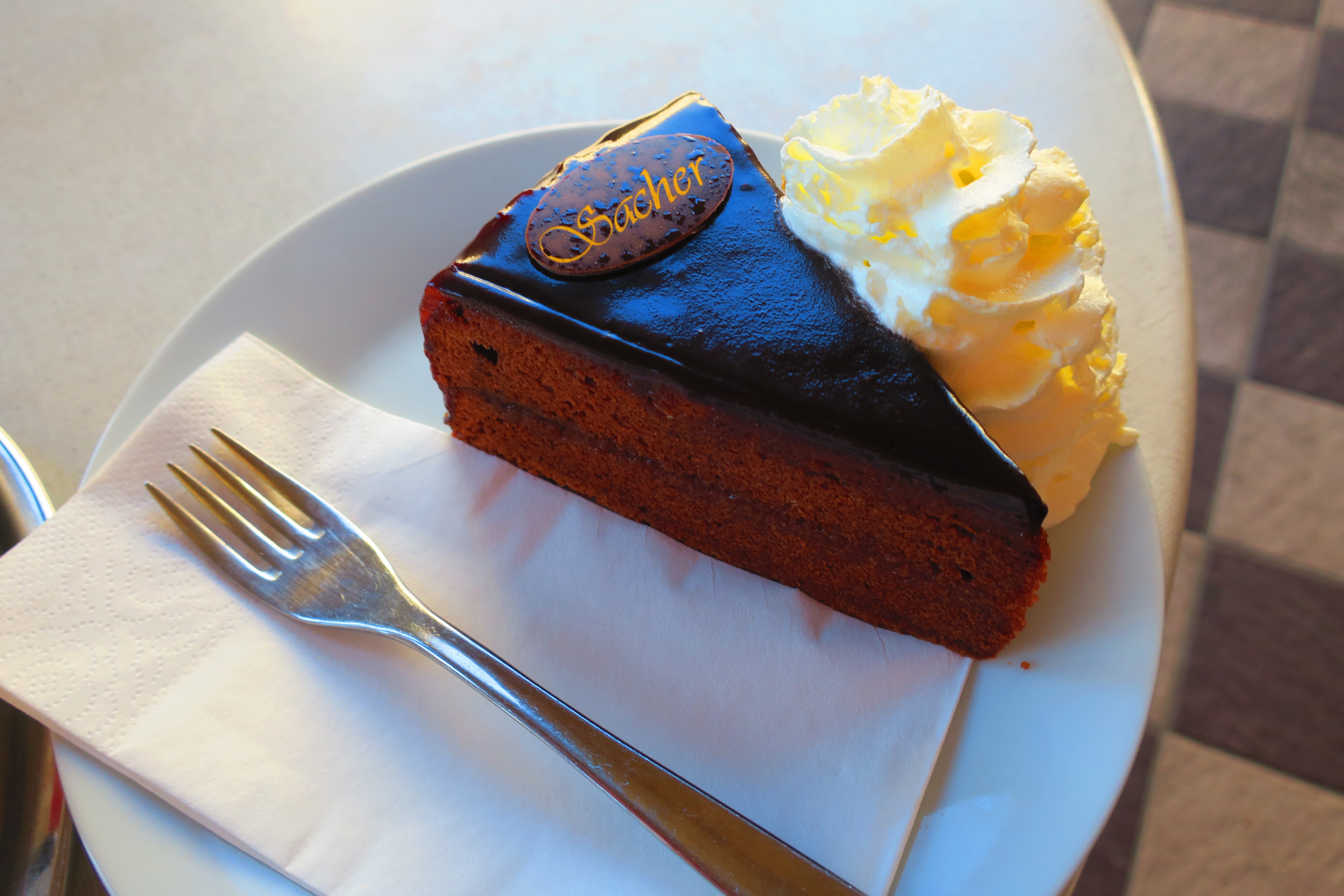 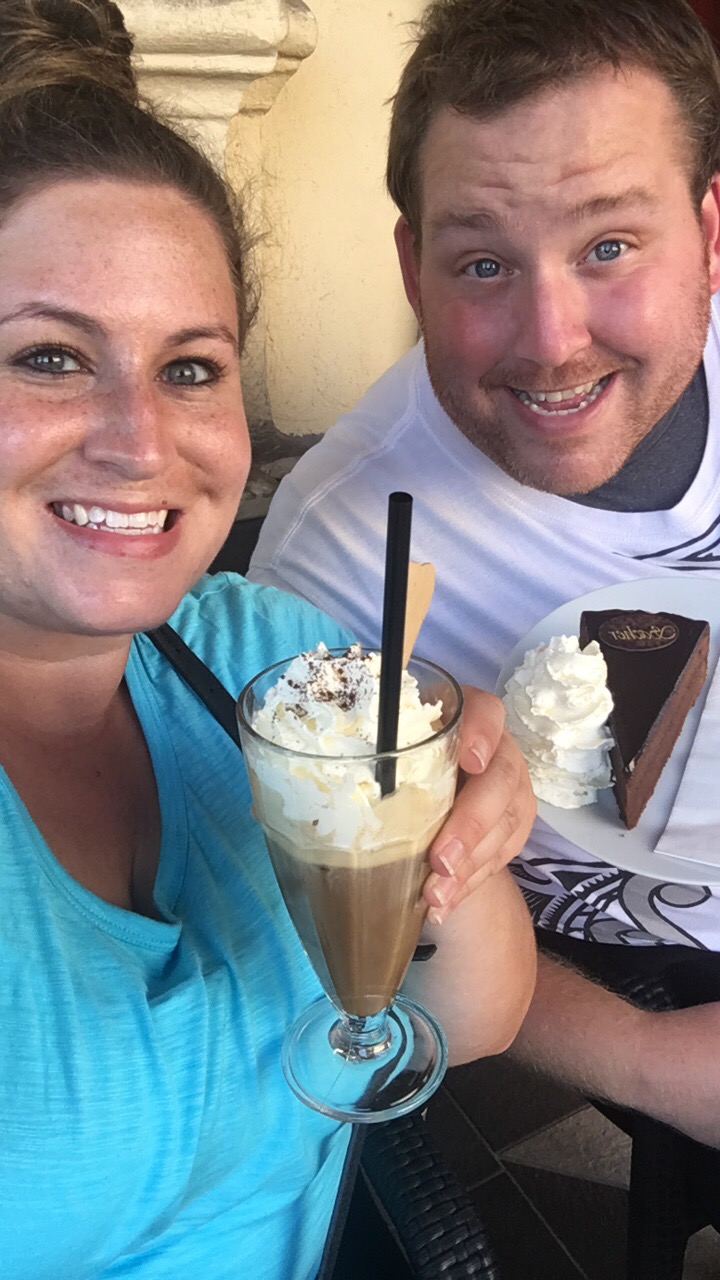 Oswald & Kalb: We searched and searched for THE best Wiener Schnitzel, but it seems like that’s going to NYC and asking where the best pizza is! Through extensive yelping and googling we found a place and were on our way. it was close, had great reviews and it looked like a real traditional Austrian restaurant. We strolled our way through the hot summer night and got to where google said it was, but there was no life there, what gives? We find the front door to the restaurant and found a note stating pretty much “Gone on vacation for month”. Okay then! So we used our phones to find a new place. Even when we have fast wifi it still takes us hours to decide, so being on slow internet makes it even worse! We decided to just “find something”. Lucky for us, we stumbled upon Oswald & Kalb with a sign stating “best schnitzel in Vienna”. Sold! Bring that It was already so late, the restaurant had a great choice of seats, and we were popped down into one in a matter of seconds. We sat inside hoping to cool off with a blast of cold air conditioning but realized that is an extreme rarity here. Regardless, inside was very quaint and perfectly Austrian. Creeky wooden floors, low ceilings (watch your head Dean!). and one busy waiter with a perfectly thick Austrian English accent. The menu was limited but we both knew what we wanted, schnitzel! Chicken for me and Veal for Dean. I got the potato salad and a cucumber salad which was amazing, the potato salad was similar to a very loose German potato salad which uses vinegar versus mayonnaise. The brightness and acidity cut through the crispy slightly oily fried chicken and was a refreshing bite. Dean loved it too and wants to now master the recipe at home. Score for me! His Wiener schnitzel was massive, it covered an entire 12″ dinner plate with the side of fried potatoes. It was everything he wanted, tender succulent veal lightly breaded and fried with a fresh lemon to squeeze on top! The thing about the food here, it was simple but so delicious and filling we didn’t even have room for dessert.

After our very short time in Austria it’s time to blast our way to Munich on the autobahn! Get ready for Beer, Pretzels, and possibly the most beautiful, inspiring castle ever!