Deeper into the south of Spain we headed to Granada, a historic city in Andalucia and the southern most province. Andalucia is home to many famous things like the famous Alhambra, the birthplace of Flamenco dancing, Jamon Iberico de bellota (Dean’s favorite! Acorn fed, free range black Iberian pigs) and of course the birthplace of tapas!

Since we had our own apartment thanks to Airbnb, we decided to head to the market and make our own tapas night. After eating out for every meal for almost 5 months, it was nice to get some stuff from the store and make all our favorite tapas right at home. Plus, it doesn’t get much better than getting Spanish Tortilla, Patatas Bravas, Cheese, Charcuterie, Pan Con Tomate and olives all where they come from! Plus, the store had Freixent Ice! (the famous Cava that you pour over ice.. we’ve been wanting to try it) It all made for an awesome first night in Granada. 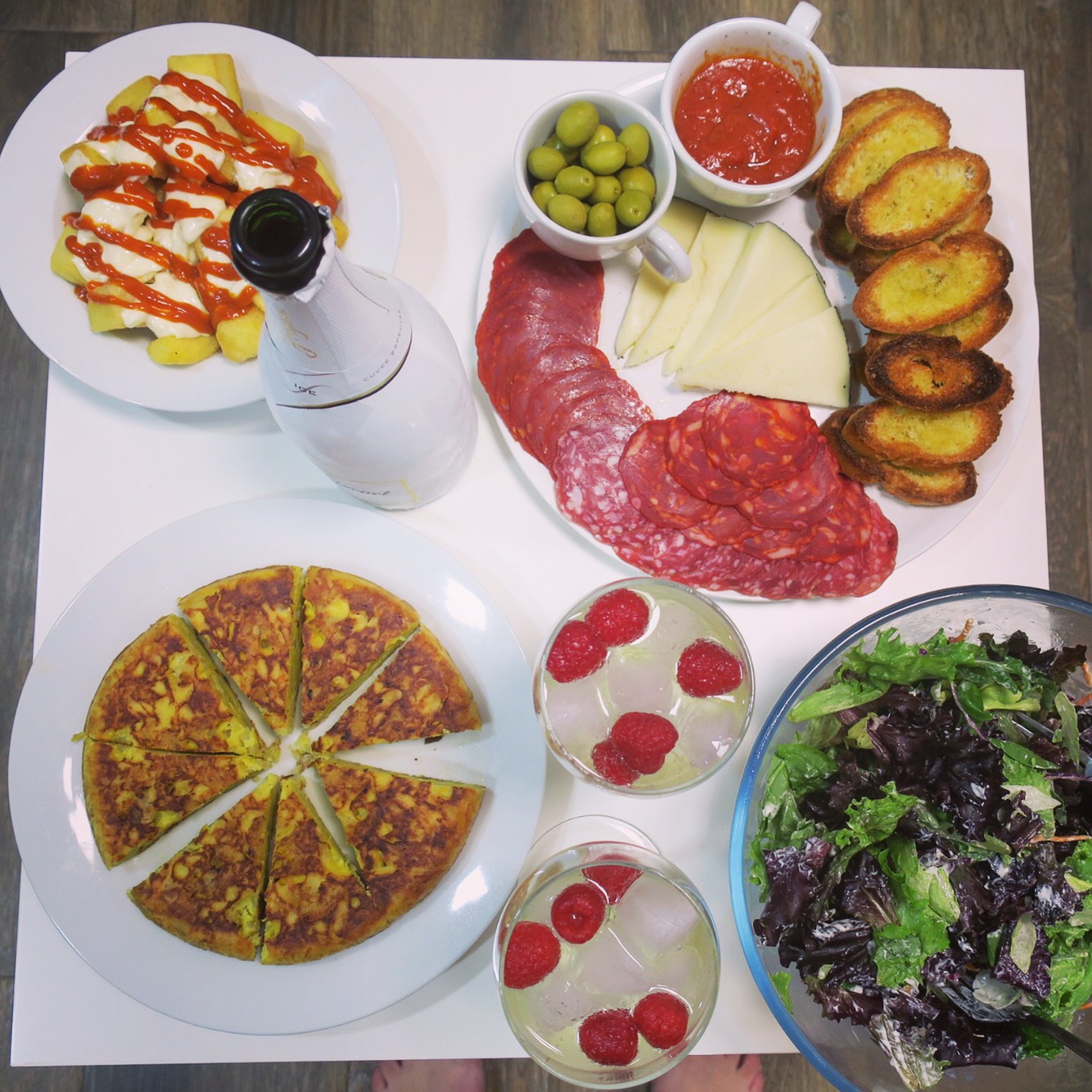 We realized as we left our Airbnb to explore that we’d come on the day of one of the biggest events, the Corpus Christi Festival. Everyone was out and about, dressed in their finest and the city had its main road blocked off for the festival. We of course were dressed in our usual casual outfits and felt very underdressed, looking fully like two fat Americans! We had high hopes of exploring the city and checking out the world famous cathedral, but between the road being closed and the massive crowds of people all congregating at the cathedral, we were out of luck. We did, however, luck out and found a side street lined with dozens of vendors selling handmade ceramics. Plates, bowls, sangria pitchers and other fun things. We had to get some! We’ve wanted a sangria pitcher since our last visit to Spain and buying one stateside just wasn’t an option! Not only did we score a super cute one, but we got some other fun things as well for our future home.

Sweaty, hot and tired from walking around, we decided to head back to air conditioned Airbnb before heading back out to visit the famous Alhambra. Almost home, we heard the cries of a flamenco singer belting out and as we headed in the direction of the beautiful sounds, we saw dancers of all ages in their beautiful dresses and the one sole young man that was dressed to the nines. A flamenco show right in the middle of the street! As if put on just for us, we were in awe of the outfits, the dancing, the passionate singing and the guitar, all where it originated. We loved watching and it was definitely the highlight of our time here!

The main attraction is Granada is the Alhambra. For 15 euros per person you have entrance to the entire site. The Alhambra is a former palace of the Moorish princes. The grounds were beautiful, surrounded with colorful flowers, bright green trees and many orange trees drooping with plump vibrant oranges. We walked all throughout and while it was a beautiful and historic sight to see, we left feeling…underwhelmed. Sure, it had all the iconic sights that you may have seen before, the beautiful stone work, the elaborate arches, the hand carved ceilings, the reflecting pools and everything you’d expect from a Moorish palace. If we hadn’t just come from Morocco I’m sure we’d be blown away by all the intricate designs on the ceilings, walls and floors but when you’ve just spent a week looking at only that, we weren’t incredibly impressed. The throngs of rude tourists didn’t help of course, but that’s to be expected from any world renowned historic site.

After Grenada we headed further south along the coast with The Rock of Gibraltar as our end goal. Gibraltar is considered part of the United Kingdom and sits at the bottom of Spain. We decided to stay in La Linea, just across the border from Gibraltar since it was significantly cheaper and was only a 10 minute walk! The rock is definitely the focal point in this area. It’s huge! More like a mountain which was much to my surprise. We crossed the border (yes… you have to bring your passports! We made that mistake and had to go back to the hotel to get them, even though they barely looked!) and the second we crossed it was an immediate change in atmosphere. It helped that there were classically dressed English Bobby’s, a red telephone booth and double decker busses on the street to greet you! It was very clear that we’d just entered English territory. Initially we thought the only real thing to do here was to see the rock but it’s a whole city down there! We walked from the border to downtown, which actually took a lot longer than either of us thought. We had to walk across the airfield that runs right through (and had to wait for a plane to come through…that was cool!) and finally got to the main square in about 25 minutes. Now that we were back in the UK we had to get some classic pub fare! We got some fish and chips, bangers and mash, some Bulmers (Magners in the US), Bushy’s Gibraltar beer (with hops grown there) and reveled in the fact that we were instantly in the UK for dinner. We loved hearing the English accents and seeing everything in British Pound. On our way out of town, knowing we needed to see the rock up close, we decided to take a drive up and see how far we could get knowing at some point they’d ask us to buy an entrance ticket. Why do you have to pay for EVERYTHING these days? We drove until we were stopped and asked to park but were able to walk further up to a lookout point without having to purchase a ticket. The rock is home to many monkeys who made themselves known the second we stepped out of the car and started walking up the very steep mountain. They’re everywhere! Hanging on the rocks, in and around the constructions sites and in the middle of the road. The 10ish minute walk up the (steep!) mountain and we suddenly had the perfect view of both Europe and Africa. An awe-striking sight to not only see the two continents but to know we’ve been to both!

On our way to Sevilla, our last stop in Spain, we stopped in Jerez, the birthplace of Sherry. Sherry is a fortified wine that can range from dry in which you would have as an aperitif or sweet with dessert. We managed to find Lustau winery who was finishing their last tour with a tasting and were able to join for the best part. We were able to taste 8 of their signature sherry’s and tried everything from dry to sweet. After soaking up our tasting with tapas across the streets we explored the the cute little town of Jerez and drove by some of the more well known wineries like Tio Pepe, which was unfortunately closed for the weekend. A great little stopover on our mini road trip.

We only had 2 nights in Sevilla and we quickly realized it was another place we wish we had more time in. We decided to stay a little outside the city center since the hotels were a little cheaper and had more options for parking. We found an AC by Marriott on Hotels.com through Ebates (use our links and make a purchase so we get credit!) and we’re incredibly happy. Because it was outside a little (only about 10 minutes drive) it was more affordable and it was SO nice. We were so happy there. We were in Sevilla on a Sunday but that didn’t stop us from seeing all the main sites. While it was definitely quieter in town than if it were a weekday, there was a lot more life than last Sunday in Valencia. First we walked through a gorgeous park to visit the Plaza España. Horse drawn carriages led the way to a large plaza circled by amazing architecture. In the center sat a beautiful fountain, and a small moat with row boats for hire. We walked around and soaked in the gorgeous Spanish tile work and architecture (and the hot 106 degree sun!). After the Plaza we went to check out all the other main sights of Sevilla. The massive cathedral, sevillas own moorish palace and the Metropol Parasol, or as the Sevillians call them “La Setas (The Mushrooms”)! The architecture here rivaled that of Madrid. Each building was more beautiful than the one before.

We decided to make our last night in Spain a memorable one and booked tickets to a professional Flamenco show. It was a much different experience than the free show in Granada but we were still so glad we did it. There were a lot of options to choose from when we were looking at which to go to. Some had options with dinner, some with a drink included and some just had the show. The options ranged from $18-$60+. Since we’re trying to watch our spending, we opted for one that was $18/person that just included a show. It was perfect! We had front row seats to a great performance with 2 dancers, a sole passionate singer and a great Spanish guitar player. The male and female dancers shared so much passion and flair!They danced together and did solo dances as well. The loud crack of their boots on the wooden floor, the clapping of the the singer and the rhythmic tapping on the guitar all played together in a beautiful show. We both. noticed how the sounds of flamenco have an eerie similar sound to the Muslim call to prayer, the echoing call from the singer sound very familiar to what we heard in Morocco and Indonesia, and the movement of he dancers have Indian influences as well. It was so interesting to see all these cultures blended together in beautiful harmony. 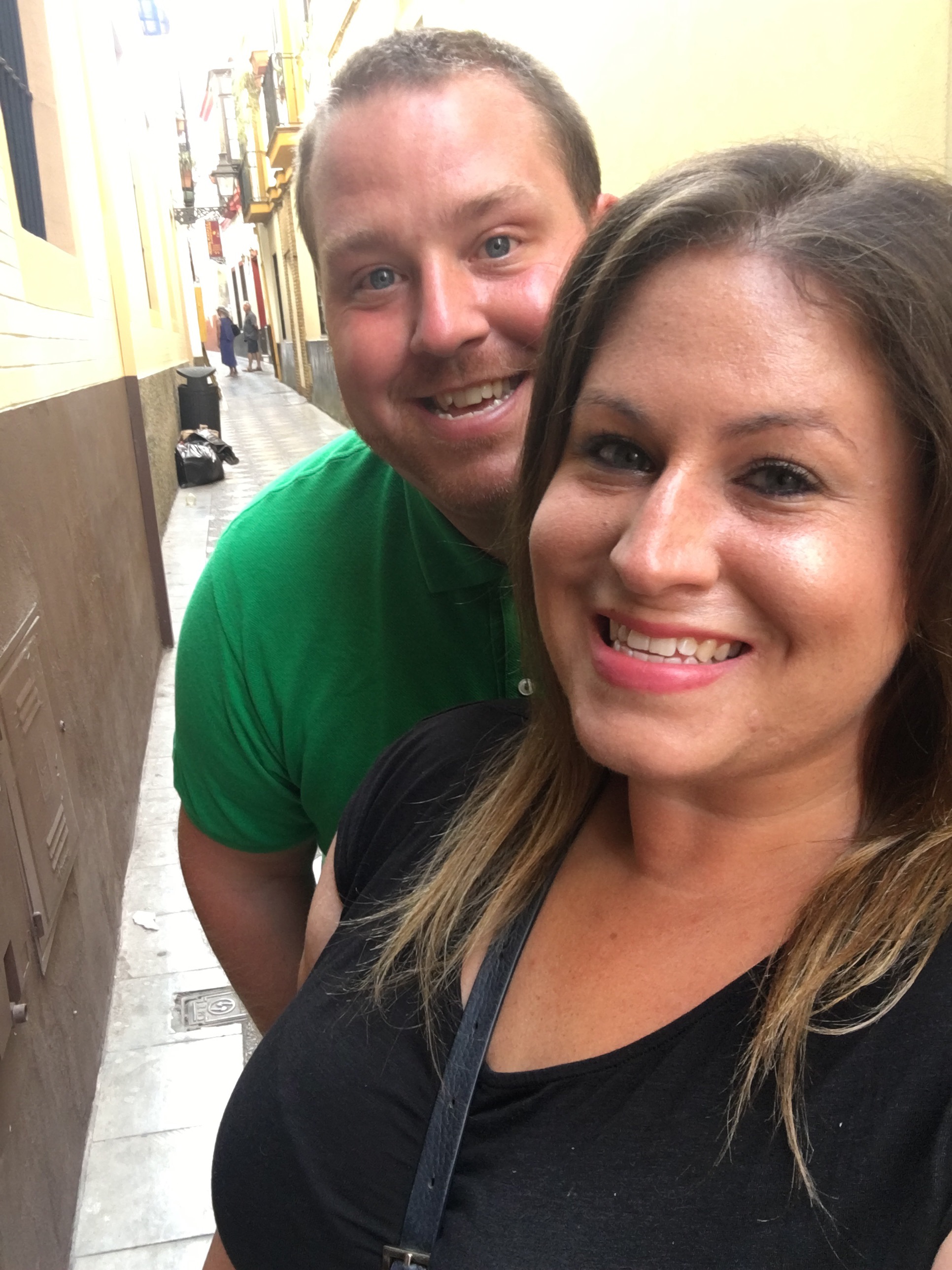 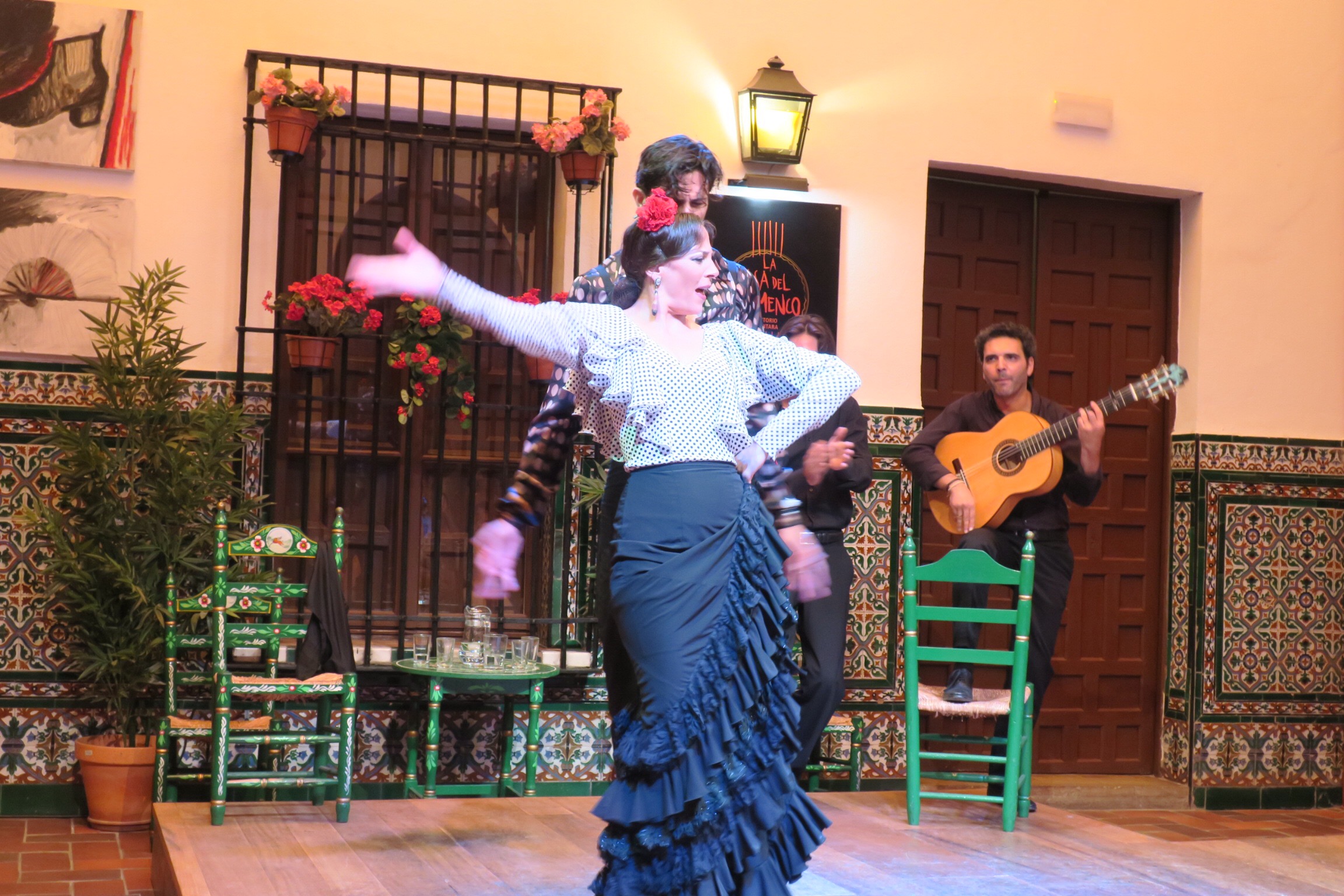 Just like our last visit to Spain, we’ve left feeling like we’ve gotten just a little taste of this amazing country. The food, people and culture are intoxicating. Next stop, Italy! The first time for both of us and we can’t wait for pizza, pasta and Peroni’s!